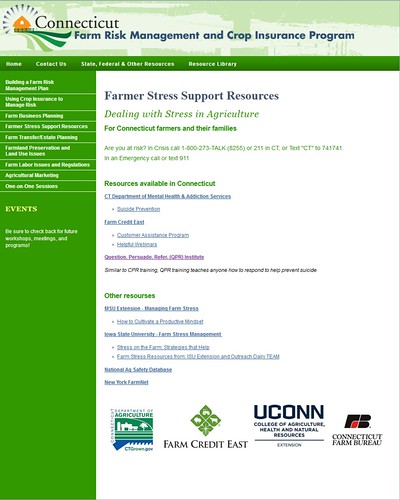 “We deal with farmers all the time and we know the issues they face. They are under stress. How can we provide resources? How can we help?” These were the thoughts of extension educators Joseph Bonelli and Mary Concklin as they worked to develop a program for Connecticut farm families called Farmer Stress Support.

Nationwide, farmers are under pressure and Connecticut is no exception. Farmers often face issues they cannot control, such as challenging weather conditions and financial stress. They often do not get enough needed downtime and may not be able to hire additional labor at key times.

At a meeting in the fall of 2018, the UConn Farm Risk Management Advisory Committee, composed of agricultural service providers and farmers, had identified stress as an important issue for Connecticut farmers and resolved to develop a program that would provide support to farmers and the people around them. They investigated programs across the country and found excellent resources from Michigan State University Extension. MSU provided materials for a training program that Bonelli and Concklin offered in cooperation with other agricultural service providers during the spring of 2019. An informational card was developed by MacKenzie White and Nancy Barrett, members of the UConn Farm Risk Management Advisory Committee, that provides phone numbers and a website specifically for emergencies in Connecticut.

Professionals from a variety of backgrounds attended a daylong training session, learning to identify sources of stress, techniques for managing stress, how to communicate with farmers who may need help and to recognize the warning signs of suicide. Mental health professionals and the manager of Suicide Prevention of United Way of Connecticut were among the speakers. QPR (question, persuade and refer) was offered twice as a separate optional training.

Farmer Stress Support training taught participants to ask key questions, including talking about whether or not someone was thinking about suicide. One of the key takeaways, according to Mary Concklin, was to know that in asking about suicide, one is not planting the idea but instead potentially providing an opportunity to communicate about it.

The program was well received, with several people taking the QPR session twice. Students from Lebanon Regional Agricultural Science and Technology Center participated in the training. They had chosen to do a presentation on the topic of suicide prevention among farm families for a national competition and became deeply engaged in the program.

The training program was so successful that plans are being made for sessions in the late fall and early spring. Members of the group of cooperating agricultural service providers are committed to continuing it and providing support. Farmer Stress support is a team effort.  Member organizations include UConn Extension, Farm Credit East, the Connecticut Department of Agriculture, Connecticut Farm Bureau and the USDA Risk Management Agency.

All the agricultural groups want to reach a wide range of farming communities. Concklin, who conducts educational programs for fruit and vegetable growers, distributed the informational cards at a summer grower twilight meeting.

“I placed a pile of the cards with suicide prevention information on the tables at the meeting. Almost every card was taken,” she said.

For further information, go to s.uconn.edu/farmstress.