In 2014, UConn’s Office of the Associate Vice President for Budget, Management and Institutional Research hired outside consultants to conduct a study on the economic impact of UConn in the state of Connecticut. The five-year update is being prepared in-house by a group of UConn experts in a collaboration between the Department of Agricultural and Resource Economics (ARE), the Zwick Center for Food and Resource Policy and the Department of Economics. The team includes ARE professor Rigoberto Lopez, who is the team leader; ARE Ph.D. student Mahdi Fallahi; and Steven Lanza, assistant professor in residence in the Department of Economics.

“UConn has been a key economic drive of the state for nearly 140 years,” says Lopez. “The purpose of this study is to ascertain and document the significance of the University of Connecticut to the state’s economy as measured by the chain of spending linked to UConn’s programs and activities. We know at this point in the study that the total impact is in the billions of dollars, and it is significantly higher than estimated in 2015.”

The study examines the economic contribution of the main campus in Storrs, regional campuses and UConn Health and includes impacts on statewide output, employment, payroll and benefits and their contribution to the state’s gross domestic product.

“There is a cascading effect on many industries from retail businesses and health care, to real estate, trade industries and state and local taxes,” says Lopez. “It’s important to document in numbers the impact of UConn on the state economy. It’s not just about teaching; the mission of UConn is more complex and includes research and outreach programs and hospital services, all of which affect the economic and quality of life of residents throughout Connecticut.” The report is to be released publicly at the beginning of the fall semester.

In another project, Christopher Laughton, director of knowledge exchange at Farm Credit East and a master’s student in ARE, is researching the impact of the green industry in Connecticut as part of an independent study under the supervision of Rigoberto Lopez. In the latest census, the green industry accounts for 51 percent of all agricultural sales in Connecticut, making it the largest agricultural sector in the state. 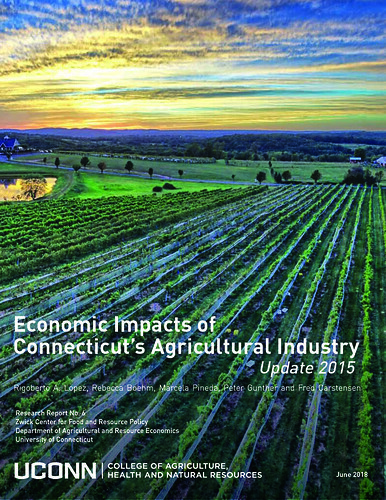 “The Connecticut Nursery and Landscape Association (CNLA) hired us to do an economic impact of the industry,” says Lopez. “Christopher is uniquely qualified to create this report, having earned his horticulture degree from Cornell and MBA from UMass Amherst, in addition to having horticultural experience working at a family nursery business.”

“This report will give those in the industry a chance to show their economic significance and jobs impact in the state,” says Laughton.

In addition to the data provided to the green industry, the report will provide information for UConn students.

“The green industry impact study can be used to highlight current trends in the Connecticut industry and to expose students to viable green industry employment opportunities,” says Wallace.

Future studies for Lopez include an update on the economic impact of the entire Connecticut agricultural industry, last done two years ago, as well as the emerging hemp industry.

“We have found that this type of information is necessary and helpful to stakeholders,” he says. “As an example, the hemp market is new in Connecticut, but we have to be very careful with risks and investments as the state was a late entering this market. Everyone is looking at the revenues, but not many are looking at the long-term costs and risks. The industry needs information.”

“Our goal is to provide quantitative information for private individuals as well as public officials with respect to agriculture, food and natural resources in order to improve their decision making.”