Recently ranked as one of the 10 Best Landscape Architecture Programs for 2018, CAHNR’s landscape architecture course also prepares many for successful careers. 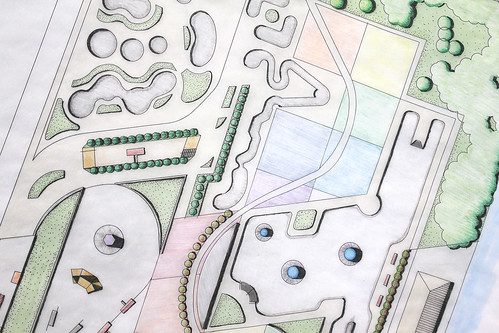 In addition to fostering super powers, this nationally accredited, professional degree LA program makes it possible to combine the pursuit of varied interests within one major. Most beginning LA students have inclinations toward at least two of these: artistic expression, constructing things that have lasting value, interacting with many different types of people or enhancing both the built and natural environments, according to Westa. LA Alumni Dan Colbeck, Ashley Cruz, Nancy King and Masato Kametani are examples of those who put their learning and interests to work after they left UConn.

Dan Colbeck, who graduated from LA in 2002, was one of those undergraduates with diverse proclivities. He said, “I wanted a career that allowed both my artistic and my technical math sides to come out.”

Currently, Colbeck is a principal with a 12-person firm, Pamela Burton & Company in Santa Monica, California. From his ten years of experience with that company, he observes that the combination of art and science is essential in real life commercial, institutional and residential settings. You need to understand how things work, according to Colbeck. “A beautiful thing that can’t be built is not worth anything. Conversely, seeing people using what we have built and experiencing it the way it was intended is fulfilling,” he said.

“My current projects are something I could not do anywhere else,” Colbeck added.

In a typical day, Colbeck works on about six projects that include everything from high-end residences in the Hollywood Hills to high-rise buildings in Los Angeles. His job description includes all phases of the projects as well as mentoring those under his supervision. His unique assignments include designs for American embassies in Taiwan and the Dominican Republic and residential projects he has built for sports and entertainment celebrities.

“I use the basics I learned at UConn every single day in my job,” Colbeck said. He cited AutoCAD, design theory and site analysis as examples of valuable learning.

Besides longer commutes, one area where Colbeck found California different from Connecticut was in the climate. For example, the absence of a freeze and thaw cycle allows for other methods of construction and the use of a wider range of plant materials. He finds himself, Colbeck says, “…creating landscapes that use 50 percent less water than 20 years ago. Almost all of the projects I have worked on have Leadership in Energy and Environmental Design (LEED) certification. The impact becomes integral to what we do.”

Another California-based LA graduate (2007) is Ashley Cruz. She originally wanted a career in photography and graphic design, but her love for the living landscape and arranging spaces won out. As a young sophomore, she was even more encouraged when Westa told his LA students that they could be professionals earning a $40,000 a year salary when they graduated.

Cruz thinks of LA as a “social” profession and also one where she can emphasize habitat restoration and green infrastructure in her designs. “I want to create spaces for people to feel good in and to make positive changes for the environment,” Cruz said.

With her new job of several weeks at Keller Mitchell & Co, a small firm in Oakland, Cruz is using her passions to advocate for “conservation, preservation, restoration and education.” She said, “I want people to be conscious of their surroundings. For instance, all our city streets drain to the (San Francisco) Bay. The more we become aware of that in our actions and design, the cleaner the Bay will be.”

In addition, she promotes the environmentally-friendly and safety-conscious Complete Streets concept that she previously worked with as an urban planner.

Cruz first learned how to stand up for her creative ideas as part of the LA class critiques, or crits, in front of peers and a panel of judges. She said that learning to articulate her design and persuading others to see it as she did was good practice for what she does now.

“The more I learn about being a landscape architect, the more I realize I truly am one,” Cruz said.

Cruz, like Colbeck, must consider the California landscape and its susceptibility to drought in her designs. For example, most of the firm’s work is with regulated public projects, and architects are required to provide areas to capture and treat stormwater. In addition, Cruz also realized that she had to learn more about a Mediterranean climate, where there are mainly two seasons of plant growth; the wet season and the dry season. “Taking a community college class on California native plants was one of my most rewarding decisions,” remarked Cruz.

Reveling in a variety of people and projects

Nancy King is one LA alumna (2003) who is already familiar with native plants in Connecticut. She is a principal of Wilton, Connecticut’s Seventy Acres Landscape Architecture & Design, which she founded.

King left a previous career in business when she discovered that it was not her passion, and, after some seeking, became a nontraditional student in LA for a second college degree. “I realized that landscape architecture people loved what they did. I finally found my people,” she said.

She enjoyed the broadness of UConn and benefited from the studio setting of the LA department where she could be with the same small group of students for three years. Kings feels she contributed to the traditional students’ education by sharing life and her working world experiences, and they inspired her by jumping into projects with a fresh approach. “They became like extended family to me,” King said. She also forged a friendship with LA classmate Brook Clark, a native of Connecticut. They graduated at the same time, and Clark is now a principal with Seventy Acres.

One aspect that King likes about her LA career is the variety. For instance, she gets to use her super powers and combine some of the interests Westa mentioned, like art, math, science, people skills and helping clients to understand and connect to nature, as she works on landscape designs in New York and Connecticut. “Everything is interconnected,” she said.

Diversity also comes with the types of residential, institutional and corporate projects she takes on. For one, the clients and what they want to accomplish are different from site to site. And, each property has its own capability, according to King. “You have to be creative when you have property constraints and natural systems. You have to open up and explore,” she said.

King says, “I was very happy to find the profession of landscape architecture because it has changed my life in a beautiful way.”

No stranger to change, LA alumnus (2000) Masato Kametani went from his densely populated native city of Tokyo to rural Storrs for his education. He is now working in Dubai as the head of the landscape department for ae7, a multi-disciplinary design firm with offices in UAE, Jordan, Italy, Germany and the United States.

Kametani’s passion was and is “to change Tokyo.” His shifted his plan of how to accomplish that when he met PSLA Associate Professor John Alexopoulos in his sophomore year. When Axelopoulos heard of Kametani’s goal, he recommended switching to LA and said, “Then, you are in the right place.” Kametani immediately changed his major.

“Learning from professors, who had a strong interest in different aspects of the profession, was invaluable,” he said. One characteristic Kametani carried with him from Storrs to Dubai was the ability to know when to “start over,” which is a concept introduced by PSLA Associate Professor Peter Miniutti. “It didn’t matter if it was during our design studios, more technical lectures or writing a paper, we would say, ‘Better start over’ to each other when we were stuck or not able to progress with our design ideas,” Kametani said.

In his current position, his brain is trained to oversee 20 landscape designers in three offices. “My mind is constantly switching between the design and creative sides to engineering/technical and to the administrative side. I definitely miss those days when I was able to simply focus on design,” he said.

Dubai faces some of the same water use problems as Colbeck and Cruz mentioned about California. But, in Kametani’s opinion, it is “a different level” in Dubai with its scorching heat.

Kamentani said, “If I am not careful to balance water requirements, and I exceed the maximum allowed water volume, the irrigation water simply runs out, and then the whole landscape suffers.” In addition, a wide variety of plant materials is not available in Dubai, limiting projects to the same or similar plant species. However, he said, “I find myself easily adaptable or accustomed to the local environment.”

Kametani has done many projects in Japan as well as in Dubai, but he doesn’t feel that he has made his significant impact on Tokyo yet. Although, after responding to the interview questions via email, he wrote, “In every project, I try to create a meaningful environment to improve the quality of life for people. Now, I am going back to my work to make the difference!”

The above illustration is a landscape drawing by Justin Russo, PSLA Class of 2018. Photo credit: Kevin Noonan/UConn photo.