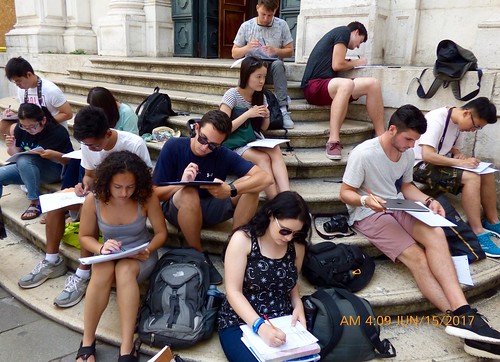 During the summer of 2017, fourteen students embarked on a trip of a lifetime as part of a course, European Urban Form and Design, with Associate Professor of Plant Science and Landscape Architecture Peter Miniutti, and adjunct instructor Natalie Gray Miniutti.

Two years ago, the husband and wife team went to Florence as part of a teaching project organized by then-Associate Dean Cameron Faustman, at ISI Florence. After the trip, the pair decided they wanted to organize a study abroad trip for their landscape architecture (LA) students.

“We can all be a little egocentric in our day-to-day lives,” says Peter Miniutti. “Traveling to foreign countries for an extended period helps the students see their environment differently, more objectively. It makes it easier for the students to see how age-old universal design principles manifest themselves in built form century after century. Done right, nothing beats experiential learning.”

The four-week trip included eight countries and twelve cities. Students paid approximately $5,000 each for their flight, train travel and accommodations. They were required to take a one-credit pre-departure class, in addition to the three-credit landscape architecture study abroad course. Students were housed in youth hostels and traveled by Eurail pass. Most of the students are landscape architecture majors, save one business major.

The adventure included stops in Lisbon, Portugal, Madrid and Barcelona in Spain, three cities in Italy–Rome, Florence and Venice–as well as Munich and Berlin in Germany, Prague in the Czech Republic, Amsterdam in the Netherlands, Brussels in Belgium, and France, returning home from Paris. 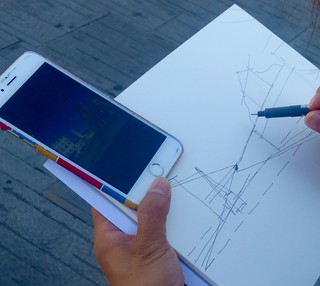 The object was to study the urban design of European cities, particularly successful place-making. “The Europeans are so far ahead of us with sustainability,” Gray Miniutti says. “We visited very notable gardens and architecture such as Villa D’Este, Villa Lante, Villa Gamberaia, Versailles, Vaux le Vicomte, the Vatican, Neuschwanstein Castle, in addition to touring cities,” Gray Miniutti says. “Our youth hostels were right in the city and they were fabulous, extremely affordable and accommodating, with free tours and group kitchens for cooking meals.”

Landscape architecture student Christopher Wojick says  of the trip, “The exploration of plazas and how they display age-old design principles is something that I found to be incredible. This trip also allowed me to explore my independence while still working alongside my peers. I was able to work closely with Peter and Natalie Miniutti through critiques in each of the twelve cities we visited. It was overall a very insightful trip full of many different cultures, outdoor designs and learning experiences.”

Jacqueline Aylward is also a LA major. She says, “The trip was definitely a learning experience. It was basically my first time out of the country, aside from Canada. Being in a new country every couple of days or so was something most people can only dream of and something that I will remember for the rest of my life. Exploring cities where English was not always spoken helped me acquire a lot of navigational skills along with learning a few words in several different languages. Being able to experience the cultures of not only each county, but each city, was definitely my favorite part of the trip and was such a fun and educational way to spend my summer.”

During the pre-departure class, an LA graduate student with European travel abroad experience spoke to the group on topics from what to pack and how to plan the trip, to safe travel tips and cultural differences.

“For most of the countries we visited, English was the primary language, but we had the benefit of several students being able to speak a foreign language,” Gray Miniutti notes.

“The students absolutely loved it,” she says. “They will never forget this trip, and it’s a great marketing tool for themselves when seeking employment. Landscape architecture firms love hiring students with worldwide travel experience. Many of these firms work internationally. They see the value of hiring graduates with this type of global learning. It’s a huge foot in the door for them.”

“We can’t wait to do another trip, but we have decided to wait a year until our incoming students have been exposed to the major a bit longer. When we do plan another trip overseas, we’d like to visit new and different countries and cities.”

“It was grueling,” she adds. “It took all of us about a month to recover, but it was a wonderful experience. The students were great. It reinforces what we teach but it’s so much more powerful than a PowerPoint presentation. They experience the food, the culture, the history of cities, the language, there’s just so much we exposed them to during the trip.”