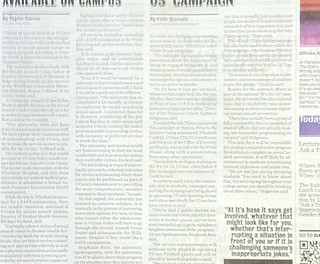 The Bulletin (Norwich). 5-30-15. Referenced, in an article about farmers’ markets, a 2010 report called “Economic Impacts of Connecticut’s Agricultural Industry.” CAHNR worked with other groups on this economic analysis.

The Day (New London). 6-2-15. Quoted Associate Extension Professor Tom Worthley from the Department of Extension about his plans for a Stormwise demonstration site in Voluntown. Stormwise is a forest vegetation management program.

UConn Today. 6-3-15. Ran an article about a study of freshwater fish by two researchers in the Department of Natural Resources and the Environment. Graduate student Jan-Michael Hessenauer and Associate Professor Jason Vokoun investigated the differences between largemouth bass populations that live in areas of recreational fishing and those that came from protected bodies of water. The findings are published in PLOS ONE. See also a story in Phys.Org.